The Vuuzle.TV streaming platform is chosen by thousands of people around the world. After all, Vuuzle Media Corp constantly improves technical capabilities and cares about the quality of content. In particular, on Vuuzle.TV the user can watch their favorite movies, series, and shows for FREE and 24 hours a day. Of course, you agree with us, this is a nice bonus!

Download VuuzleTV on IOS, Android, Roku, or online at Vuuzle.tv See tons of channels and thousands of movies all free! Vuuzle is a premium streaming service that offers live video content. Such as hit television shows, news, sports, and feature-length movies.

Vuuzle Media Corp. founder and Vuuzle Film Production executive producer Ronnie Flynn says Vuuzle Dubai Studios has been equipped with the best and also most modern technology in the world. And also to involve in work of the best experts in the field of media. On the basis of Vuuzle Film Production, various media content is produced: from shows to TV series. You can also catch a selection of the most rated projects on  Vuuzle.TV .

“HOT TOPICS WITH RONNIE” ON VUUZLE.TV

Ronnie Flynn was born in the United States in Los Angeles, California. He spent most of his career in Asia and Indonesia. He also owns many entertainment corporations in Romania, Ireland, Italy, and the United Kingdom. Ronnie Flynn has over 33 years of experience in entertainment and business. He also starred in popular Hollywood movies and as a DJ traveled almost the world. Ronnie Flynn has become one of the most sought-after personalities in business as a corporate advisor and consultant to well-known multibillion-dollar corporations.

The show Hot Topics with Ronnie was visited by a talented magician Raymi. Here, you will also be able to see for yourself that magic and sorcery exist. And all this is created, gracefully and delicately, by people like the illusionist Raymi.

Watch ONLINE and FREE “Hot Topics with Ronnie – Raymi The Illusionist” on Vuuzle.TV!

On the popular streaming  Vuuzle.TV watch the show “Angie TV: Live in Dubai”. The host of the show Angela Gegg visited the famous Emirates Park Zoo and fed the local stars – giraffes Abby and Mary. Inspired by the rural charm of a luxurious African safari, Emirates Park Zoo is located in Bahia, in the northeast of the suburbs of Abu Dhabi (UAE). The place is ideal for a family vacation. The zoo is home to more than 1,700 animals, including a majestic pair of white tigers, a 31-year-old Siberian bear weighing more than 300 kg, lions, cheetahs, and dozens of zebras. Emirates Park Zoo Resort is located next to the zoo. It offers air-conditioned rooms with balconies overlooking the zoo, cave, or garden. At Emirates Park Zoo, visitors have a unique chance to have breakfast with a giraffe, zebra, donkey, hippopotamus, camel, llama, skinny…

Angie TV: Live in Dubai host Angela Gegg – Belizean artist, author, and also a real estate expert. She is one of the leading artists in Belize. Over the past decade, she has received numerous awards for her musical and visual works of art. In particular, Angela has participated in six major solo art exhibitions and more than twenty joint art exhibitions in Belize, Texas, New York, Miami, and Trinidad.

Angela Gegg is also considered one of Belize’s most outstanding artistic voices!

In July 2006, she published her first book, The Light, the Dark, and Everything in Between. In 2009, at the start of her sixth major personal art show, Impulse, she also released her second book, Artist Confessions. Abstract surrealist artist Angela Gegg specializes in Cubism. It has achieved regional recognition throughout the Caribbean, USA, and Belize. Since 2004, she has had six major personal exhibits. In many interviews, she stated that her main influence as an artist is Salvador Dali, the father of surrealism; Pablo Picasso, who started the Cubist movement; and Jackson Pollock, an influential American painter and a major figure in the abstract expressionist movement.

Watch ONLINE and FREE “Breakfast With Giraffes” on Vuuzle.TV!

Vuuzle Film Production presents  The Portal – a modern thriller series about fallen angels and a new frontier of life, where power, resentment, and anger reign. Each episode of the mini-series has its own interesting culmination. In the first series of “The Portal”, the producer Malcom sells his soul and exchanges it for money and also fame. The estimated running time per episode – 30 minutes.

The executive producer of the series is  RONNIE FLYNN

Watch ONLINE and FREE TV series “The Portal” on Vuuzle.TV! 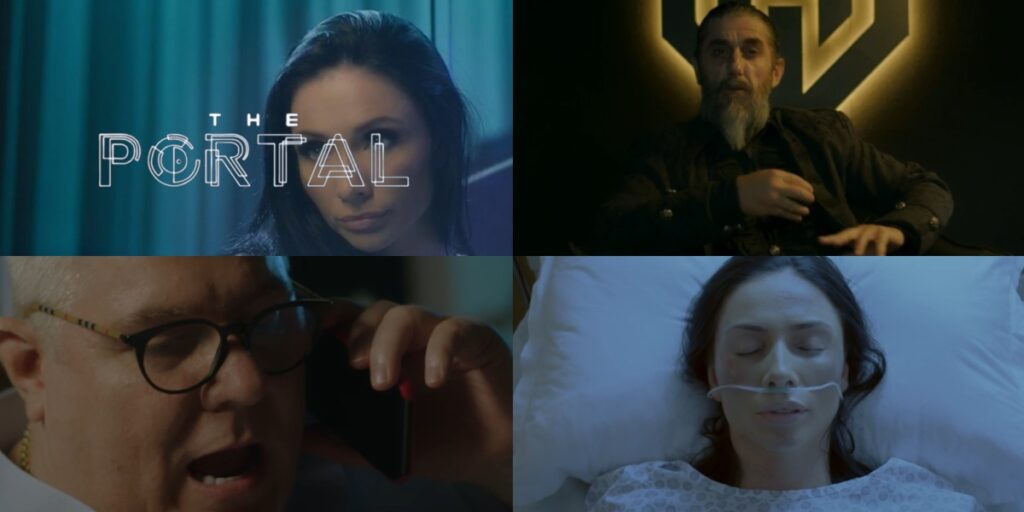 The hot PREMIERE of the second series of the mini-series The Portal is expected soon.

Next postVuuzle.TV shows projects about the most picturesque SEAS of the world

Founder Of Vuuzle, Ronnie Flynn “How Vuuzle TV TICKS And Why We Are Winning”